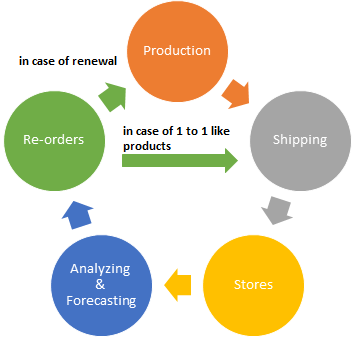 The stock management cycle is a common used term during my training on Stock Management. I used this to explain the process of product development to show the importance of forecasting and communication with a buying department. END_OF_DOCUMENT_TOKEN_TO_BE_REPLACED

There are several reasons why we don’t crack the numbers to understand our business performance:

Do you have another reason to skip Retail analysis?

One of the most important elements in retail is analyzing the performance. Retail analytics is your key to success..! At least when you analyze the right data and use the outcome the right way.

Working for different businesses the last couple of years I have heard multiple excuses from retail operators why analysis are not executed. The most surprising argument was from a premium aquarium brand in Europe: ‘I do not have the time to analyze and I just need good products’. At that time the retail store performance was down to budget and previous year. The aquarium is part of a global brand and due to the declining trend over the last 2 months Head Quarter starts asking questions why the performance is not meeting the expectations. According to the attraction manager the performance was down due the poor assortment however, in general, the assortment had not been changed verses the year before. But the attraction manager was influenced by sales hosts telling the manager that products are missing for a couple of weeks. This was confirmed by the retail manager which just ended a sales shift at the shop (usually the retail manager does not work at the till however due the current performance the attraction needed to cut costs). When I compared the current performance verses the better trading periods there was an obvious reason why trading was below expectations: 60% was due missing products which were available to reorder however somehow this has not been done. Probably because sales performance was not analyzed frequently and stock was not managed properly. The other 40% was due changes in routing, pricing, promotions and replenishment. If the attraction manager or retail manager did run a proper performance analysis there was no need to cut costs and we could skip the complete discussion on the retail store performance. Most time consuming were the daily discussions on the retail performance. Of which the attraction manager complained about making the circle complete.

I believe investing in Retail Analytics is one of the best investments you can do. Outcomes will give you information what actions you need to take and will unleash the unnecessary pressure of the unknown. I analyzed the performance from the other side of the continent in less than a day. And the attraction gained back their precious time and was ready to hit budget again.

How often do you analyze your performance?